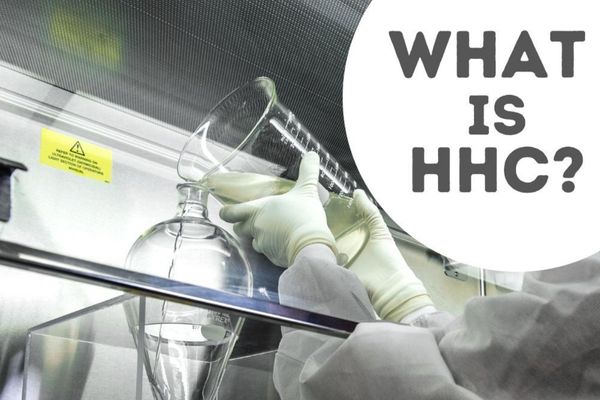 HHC, or Hexahydrocannabinol, is a phytocannabinoid that was first created by American chemist Roger Adams when he added hydrogen molecules to THC. He did so using a process called hydrogenation (yes, the same process used to create the oft-maligned hydrogenated oils found in junk food) which converted THC to HHC.

What about the test results I got with my HHC vape?

Because HHC functions as a sort of work-around for those who want to get high in non-legal states, it’s been somewhat difficult to “pin down” for many testing labs that are used to testing THC- and CBD-rich cannabis. As a result, most of the test results you find attached to HHC products show either a high concentration of delta 9 or delta 8 THC or no cannabinoids at all. Instead, consumers must rely on the chromatograph spike that is thought to represent HHC.

What the heck is a chromatograph spike, you ask?

Cannabis is tested using a process called High Powered Liquid Chromatography. The results of this test look like a bunch of peaks and valleys (similar to the silhouette of a mountain range, if you will). The peaks represent the cannabinoids found in the sample being tested. Currently, there is no established standard for HHC, so the only way labs can show that a sample contains HHC is by pointing to a peak and saying - “we believe that to be HHC.”

How is HHC made?

Purveyors of HHC will be quick to point out that it was first created by subjecting THC to the process of hydrogenation. This is because “hydrogenated” has become a commonly-seen word in the ingredient lists of our favorite junk foods. The fact is that hydrogenation is… kind of gnarly. It’s hard to know what process labs are using to make their HHC, but it typically involves dissolving a cannabis extract in a solvent and then subjecting it to high pressure, high heat, hydrogen atoms, and a catalyst containing inert metals such as palladium, rhodium, platinum, ruthenium, nickel, rhenium, or iridium. Once that’s complete, the catalyst is removed via a filtration process and the solvent is removed through rotary evaporation.

Unfortunately, because proper testing standards have not yet been established, we don’t know. Cannabis testing labs simply do not have the ability to test for the catalysts used in the production of HHC, so that alone is worrying. They are, however, able to test for many of the solvents typically used in the extraction process, so if you do decide to give HHC a try, be sure the vendor you’re shopping with provides a residual solvents test.

Does HHC get you high? What are the side effects of HHC?

Yes, it is an intoxicating cannabinoid. Interestingly, HHC shows up in multiple forms; one that is active and one that is inactive. Because there is not yet a cost-effective way to separate these two forms, you’ll likely receive a mix of the two when you buy HHC. As such, it’s difficult to know how high you’ll get from batch to batch.

All that said, most users report that HHC is similar to delta 8 THC, if not slightly less potent.

As far as side effects go, they’re reportedly similar to those experienced by users of delta 8 THC and delta 9 THC: dry mouth, red eyes, anxiety, paranoia, and hunger.

Does HHC show up on a drug test?

Anecdotal evidence from users of HHC seems to show that it is less likely to appear on drug tests, but take note that this is purely anecdotal and should not be counted on.

Well… Unsurprisingly, retailers who specialize in this cannabinoid assert that because it is not technically THC, it is legal. Industry experts, on the other hand, will often point to the Federal Analogue Act, which states that any substance that is analogous to a Schedule l drug is, in fact, also a Schedule l drug. So, because HHC mimics THC (much like K2 and Spice once did), it qualifies as a restricted substance.

Where can I buy HHC carts? Or HHC in general?

In short… not here. But if you do decide to go out on a limb and buy some, make sure to you go to a site that provides batch compliant potency results, as well as passing tests for pesticides, heavy metals, and residual solvents.


That’s enough about HHC, don’t ya think? If you’re interested in learning about or purchasing cannabinoids that are either grown in dirt (i.e. hemp flower) or processed in GMP-certified labs without the use of harsh chemicals (i.e. CBD Oils, Edibles, Concentrates, or Topicals), click here.