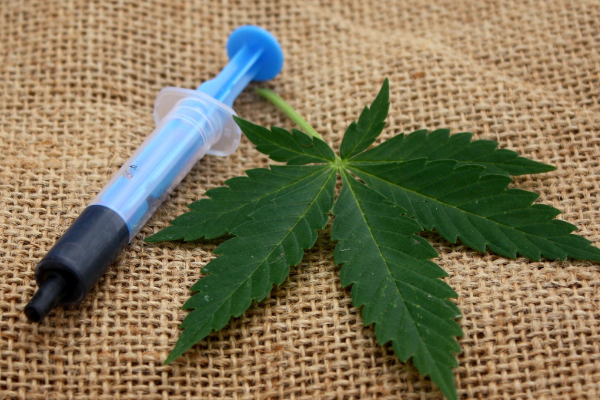 Way back in the early aughts, a Canadian engineer named Rick Simpson was diagnosed with skin cancer; basal cell carcinoma, to be exact.

The story goes that after becoming frustrated with the medications he was given, Simpson dove into researching cannabis. Through this research, he decided to make an extremely potent batch of hash. Unlike the bubble hash, rosin, or wax that we’re used to seeing, the hash he made was extracted using 99% isopropyl alcohol, was nearly black in color, and was exceptionally thick.

He started applying this extract directly to his skin, and after only four days, his cancerous cells were reportedly gone.

This is how the saga of RSO, or Rick Simpson Oil, began and the rest is history.

What is RSO
RSO, or Rick Simpson Oil, is a high potency extract of decarboxylated cannabinoids, containing in excess of 90% THC or CBD. Because whole flowers are used when making RSO, this oil is truly a full spectrum extract and, if made correctly, should contain all cannabinoids and terpenes, as well as a variety of other plant compounds such as fats, lipids, and proteins.

What’s the Difference Between RSO and FECO (F.E.C.O.)
FECO, or Full Extract Canna Oil, and RSO are very similar in that they are both whole plant cannabis extracts. Additionally, they both use alcohol as their principal solvent.

The main difference is found during the process of evaporation. RSO is evaporated at a relatively high temperature, whereas FECO is evaporated at a low temperature, thereby preserving an extremely high amount of terpenes and other plant compounds. While this is an important thing, it limits the ways that the extract can be used. Due to the larger amount of plant matter, it really can only be ingested. As such, many people favor RSO for its versatility.

How to Make RSO
The recipe is relatively simple, consisting of only two ingredients and requiring little-to-no previous experience.

Step 1:
Pour the cannabis into the bucket and then dampen it with the solvent. Crush it up with your spoon. You do not need to fully crush it up. Just work it around.

Once crushed, pour in more of the solvent so that your material is fully submerged.

Step 2:
Stir the mixture for about 3 minutes. This will allow about 80% of the cannabinoids to be infused into the solvent.

Step 3:
Cover the bucket in a large cheesecloth and use a large rubberband to fasten the cheesecloth in place. Then, pour the infused solvent into the second bucket, leaving the flower in the first so that it can be submerged again.

Remove the cheese cloth, submerge it in solvent, and stir for about minutes.

Step 4:
Cover the bucket in a large cheesecloth and use a large rubberband to fasten the cheesecloth in place. Then, pour the second round of infused solvent into the bucket holding the first round’s solvent.

Step 5:
Insert your funnel into the mouth of your water jug. Put a filter inside the funnel. Slowly pour your infused solvent into the funnel.

Once you’re done straining all of the solvent, you should have a jug full of dark liquid.

Step 6:
Pour that liquid into your rice cooker until it is about ¾ full. Leave the top off, and set it to maintain a steady temperature of about 210-230°F. This will decarboxylate the cannabinoids and evaporate the solvent. If it gets hotter than this, the cannabinoids will begin to vaporize. That is why we suggest using a rice cooker, rather than a crockpot.

Break out your fan and point it in the middle of your rice cooker. This will allow the air to not only circulate the gas away from the vents at the bottom of the rice cooker, but also the fumes that are evaporating from the top.

NOTE: Any steps involving the evaporation of solvent MUST be done in a well-ventilated area.

Step 7:
As the level of the liquid goes down, pour in more of your infused solvent.

Once you’ve finished pouring it all, wait until you have about 2 inches or less of solvent remaining. Then add about 10-12 drops of water to the mix. This water will help the remaining solvent to boil off and will, in effect, wash the extract.

As the level gets lower, listen for a crackling sound. That is the oil bubbling and cooking in your rice cooker. At this point, switch the cooker to the low heat setting and let it cool down.

Step 8:
Once it’s cooled down a bit, pour the mixture out of the rice cooker and into the stainless steel measuring cup.

From there, depending on how much extract you’ve ended up with, you can fill your plastic syringes in 2 ways.

How to use RSO
As we said earlier, Simpson started out using his oil topically. Typically, it is ingested, but it can also be smoked or even used as a suppository.

Let’s break down each method. We’ll end with ingestion, as that method of delivery will be accompanied by a dosage calendar.

How to Use RSO Topically
According to Simpson, it is best to dilute the RSO with grain alcohol before using it topically. You can do this by filling a 30ml tincture bottle ¾ of the way, adding a couple drops of RSO, and letting the extract infuse into the alcohol.

Or, after filling your syringes, you can add a bit of grain alcohol to the bottom of your rice cooker and let the alcohol soak up the excess extract. Then, use an additional syringe to suck that up and transfer it to a tincture bottle.

Apply as needed to the affected area.

How to Smoke RSO
Lots of people ask - can you smoke RSO? The answer, of course, is YES!

Try adding a small dollop to the top of a bowl or into the tip of a joint.

Now, can you dab RSO? The answer is… sort of. The great thing about RSO is that it is a true whole plant extract. This fact will work against you when you try to dab it, as the proteins, fats, and lipids will seriously gunk up your dab rig.

How to Eat RSO (and How to Dose it Correctly!)
Before diving in, we’re going to, once again, talk about FECO (F.E.C.O.). If you’re wondering about FECO dosing, or how to use FECO, look no further. The following dosing regimen can also be used for FECO, as it is intended to be ingested.

Squeeze out a drop about the size of half a grain of short-grained rice. Take this 3 times per day, every 8 hours, starting with a dose early in the morning. Simpson referred to this as “about ¼ of a drop.”

After those first 4 days, double the size of the dose to the size of a full grain of short-grained rice. Take this 3 times per day, every 8 hours, starting with a dose early in the morning. This is what Simpson called ½ a drop.

This is the point where people are usually able to take 1 gram or 1ml per day, split up into 3 doses throughout the day. Each dose will need to be about 8-9 drops. Remember, a dose the size of 1 grain of rice equals ½ a drop. That means 2 grains of rice equals 1 drop. So, a dose of 8-9 drops will be 16-18 grains of rice.

There you have it! We hope that this post will help you on your journey.


If you’re in need of cannabinoid-rich flower, smalls, or shake, you know where to go.